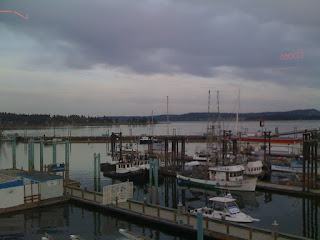 It was not a great performance for Nanaimo’s LIghthouse Bistro and Pub this week, and a crying shame too, because the restaurant is in an incredible location and might be something quite special. It’s right on the Nanaimo waterfront looking out on Protection Island and a working-boat marina (the pleasure craft are around the point in another bay). The evening started hopefully enough, I had to walk through various dragon boat teams warming up for their weekly practice just to get into the restaurant “Alright,” I thought, “Dinner and a show,”

The bistro downstairs is probably a little more elegant, but I chose the pub upstairs so I could watch the hockey game. I assumed the pub was connected with Victoria’s Lighthouse microbrewery, so I was hoping for a good solid craft brew. Instead I was informed they had Canadian, Bud, Kokanee and some other watery blonde imposter. 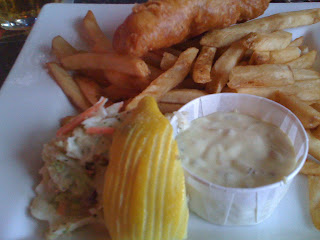 I ordered the special, halibut and chips and though the fish was fresh it was also dry, the batter was tasteless and the cole slaw congealed. The fries were cold, the gravy too dark and corn starchy. Even the waiter was a little twitchy.

A visit to their website showed they do everything about the same as their beer and food. The site hasn’t been updated since 2009 and the web design company even spelled their own name wrong.

All in all a bit of a disappointment, but I'm willing to give them another try, so long as the Dragon Boaters do too.
Posted by Vancouver Island Life at 8:50 AM No comments: Links to this post 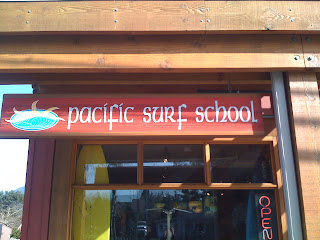 I took my first ever crack at surfing this week, thanks to a glorious turn of weather on the West Coast of Vancouver Island. Tofino is close enough to my home in Parksville on the island’s east Coast that we can comfortably squeeze in a short 2 night jaunt. It’s just over a two hour drive, spectacular, though a little hairy too. March is a good time to visit the coast with it’s migrating whale populations, storm surges and potentially spring-ish weather. They don’t call it shoulder season here, they call it ‘regular season’ instead, but the hotel rates are close to half of what they are in the summer and the crowds are far more manageable.

We picked up our gear from the good people at Pacific Surf School, located at 430 Campbell St. in downtown Tofino. There are many surf shops in town but we like this one the best, with its helpful and knowledgeable staff, great location and quality gear. It probably has one of the finer websites in town and it’s also right next door to the coffee shop / bakery where you can stock up on sticky buns before you load up your gear. 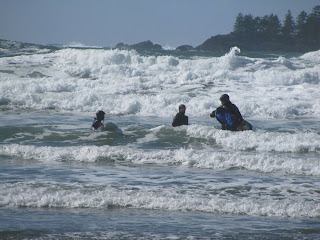 We headed to north Chesterman beach a few miles down the coast. It had been pretty stormy in days previous, though this day was bright and sunny and fairly warm for mid-march. As a result the surf was pretty intense, or trashy as the locals might call it.

We probably should have opted for the lesson at the Surf School, or at least some instruction in wetsuit application. Of the four of us, two adults and two children, two of us put their wetsuits on backwards and three of us put them on inside out. Our youngest even tried to put his leg in the armhole It took me three nearly completed attempts to finally succeed, and then I realized I had to pee. 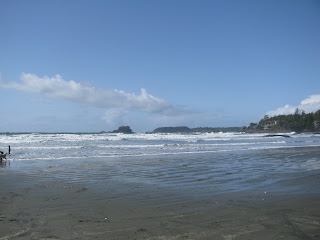 The ocean was amazing and comfortable to be in, thanks to the wetsuits. I enjoyed paddling around and splashing in the waves, but there was no way I could get up on my feet, my bad shoulder so weak and painful that I could barely push myself up to kneeling. It didn’t matter though, just to feel the power of the ocean and frolic in the waves on the surfboard was an incredible experience. We were all grinning from ear to ear and the kids actually did much better than we adults, as usual.

We had a picnic lunch on the beach and enjoyed the spectacular setting of this West-Coast treasure, promising yet again to take more advantage of the beauty we live so close to.
Posted by Vancouver Island Life at 8:18 AM No comments: Links to this post