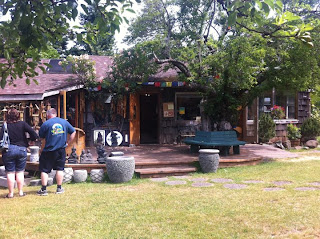 It takes two ferries to get to Hornby Island, located off the East Coast of Vancouver Island about halfway between Parksville and Courtenay. The first ferry takes you to Denman, followed by a short island drive to the next terminal. $80.00 was the return fare for our car and two passengers and takes a total of less than an hour. 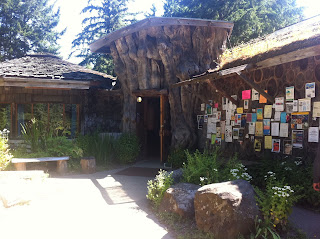 Hornby is typical of the Gulf and Discovery Islands, attracting an artistic and creative population. The island is dotted with artisan studios and organic farms, self-built houses and serene cottages.

We stayed at the Ford's Cove Marina and Campground, essentially at the end of the main road after getting off the ferry. It's a small campground with perhaps a dozen sites and as many cabins for rent, while featuring flush toilets and pay showers. There's a store on-site that offers pretty much everything you could possibly need while camping, and an espresso machine to boot. There's also a small food-stand restaurant that we didn't have time to try and a scuba operation. It is a marina so there are plenty of boats to peruse. 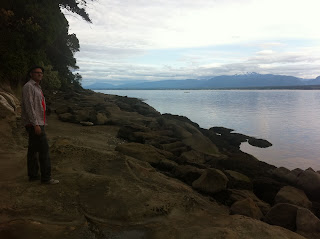 Some of the must-see attractions on Hornby include the Cardboard Bakery, a quaint little restaurant and artisan market that specializes in pizza and baked goods situated on the beautiful grounds of an orchard and garden. There is often live music in the garden on a Saturday afternoon, and other events can take place depending on your timing and good fortune.

The Co-Op, down the road is next to Tribune Bay Provincial Park, with its beautiful beach that attracts many tourists. The Co-op sells just about everything, including liquor, hardware, groceries and camp supplies. Outside the main building is a circle of markets, bookstores, bike rentals, cafes and restaurants, a true meeting place for the locals and tourists alike. There is a pub and restaurant by the ferry terminal. 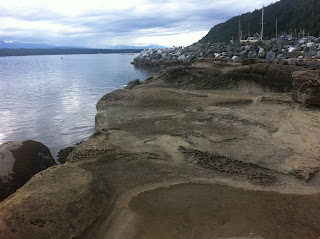 Other services and attractions include Bradsdadsland Campbground, Whaling Station Bay, Helliwell Provincial Park, wineries, kayaking and scuba. The geology of the island is fascinating and a walk along the coast features many interesting sandstone formations carved by the force of the ocean. The island is a mecca for mountain bikers and the many trails are popular for all skill levels.
Posted by Vancouver Island Life at 12:52 PM