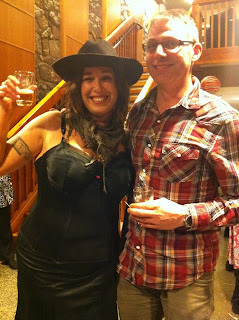 This was the second year for the beer tasting and food pairing night of the Parksville Untapped event, an annual epicurian extravaganza that's threatening to change the impression of this small mid-Island city as a stodgy, no-fun retirement community. Last year's incarnation was at Tigh Na Mara but this year it switched to the Beach Club, allowing the former to host Swirl, the wine-tasting portion of this 4 day festival.

I'm not sure how many tickets were sold in total, but they were completely sold out by the day of the event. The theme this year was a western one, with the serving staff, and many of the guests, dressed up in jeans, plaid shirts, hats and boots. Hay bales and other cowboy motifs littered the room. A great live band was set up, banging off the country covers to an appreciative crowd. 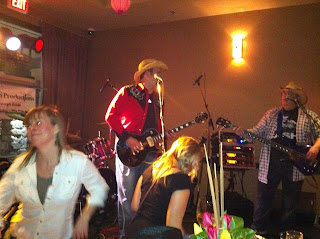 The real star of the event was the beer, all of them craft style from BC and many of them from Vancouver Island itself. Some winners in my opinion were the Howe Sound 'Total Eclipse of the Hop' IPA and Nanaimo's Longwood Brew Pub Framboise, not to mention the boilermakers made with Glenfiddich and Cream Ale from R&B Brewing. Other brewers on hand were the Canoe Brew Pub, Lighthouse Brewing, Driftwood Brewery, and at least a dozen others. The food, prepared by the chefs of both the Beach Club and Tigh Na Mara, was plentiful and delicious, with pork sandwiches pulled from a complete roast pig, local oysters on the half-shell, chili, a chocolate and fruit fountain as well as chocolate from Nanaimo's Rockey Mountain Chocolate Factory, and local sausage sliders.

The mood of the crowd cheered and livened as the beer and food flowed freely and the casual western atmosphere helped make this event a must attend social event in the mid-island. Mark it on your calendar for next year, late February 2013 in Parksville. Watch the website for dates and details.
Posted by Vancouver Island Life at 9:25 AM