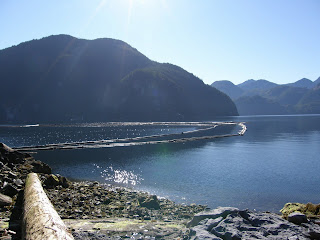 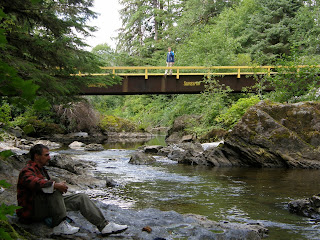 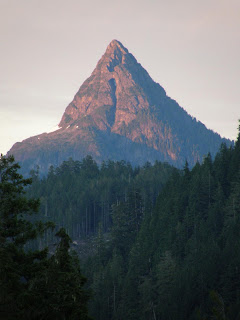 I just returned home from a classic Vancouver Island wilderness camping vacation. A small gang of 4 of us spent 6 nights roughing it around beautiful Nootka Sound on the island's North West Coast between Gold River and Tahsis.

We discovered our camp site thanks to the invaluable Backroads Mapbook. We looked for a forest rec site along the Tlupana Inlet across the bay from the Cougar Creek Rec Site. The inlet is just north of Bligh Island, an early landing site for Captain John Cook who 'discovered' these waters back in 1780 or so. We were hoping for a more secluded location than the 50 spot site with boat launch. Luckily for us there's a logging strike going on right now, and the log dump on Head Bay was completely deserted.

We got to witness a very short commercial Sockeye Salmon opening. At least 40 boats descended on our little bay, with more filling the other inlets around us while they anchored in anticipation of the opening. Some of them waited from Friday till Tuesday at 9 pm, when they finally started dropping their nets for the fish. They fished for five hours, and in the morning when we got up, they were gone.

We also got to display just how terrible we are as fisherman. Although we fished a little each day, it wasn't until Tuesday morning that we showed some actual commitment to catching the salmon we've been trying to catch. We paddled out before 6:30 and within a half hour could see the big Chinooks jumping everywhere around us, clear out of the water. We had a better chance of one jumping directly into the boat than we did of catching one on our hooks. We tried every lure, depth and technique we could think of but came home skunked anyway.

We visited the old Marble Quarry, which was the source of the original limestone for the BC legislature in Victoria. We got in some freshwater bathing on the Deserted River, near the Deserted Lake Rec site which was fuller than we wanted when we first arrived (4 other parties) We also visited the Upana caves and the town of Gold River over the course of the 6 days we spent there, paddling, hiking, fishing and relaxing. We saw black bears, bald and golden eagles, herons, seals, salmon, stellar jays, sea slugs, red snapper, otters and more on this wilderness camping trip.
Posted by Vancouver Island Life at 6:33 PM 1 comment: Links to this post 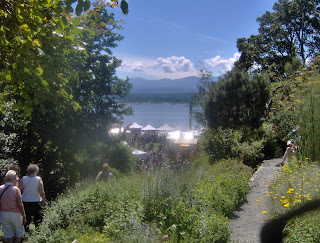 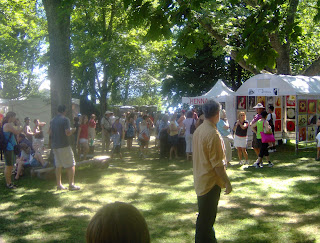 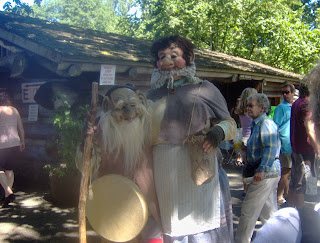 This year's Filberg Festival lived up to its reputation as the best run and most creative arts and entertainment festival on Vancouver Island, if not the whole of BC and Western Canada. 9 beautiful acres of wooded and oceanfront property bursting with some of Canada's most talented crafters and artisans, great food and music, lots to do for the kids and some fantastic shopping for the rest of the family.

The festival was packed each of the four days (the great weather helped) and it took almost that long to see everything to be seen. Bruce Cockburn played the main stage this year but I missed that show. I even saw Valdy wandering around busking a little with his guitar.

I was heartened to confirm that the 9 fantastic acres are not for sale, as I had thought (it's a different Filberg property - the one built for RJ Filberg's son - that's up for sale for $10 million) and is indeed owned and protected by the municipality, so you can look forward to next year's Filberg Festival over the August long weekend. Check Vingo.ca for more things to do and places to stay in Courtenay, Cumberland and Comox.
Posted by Vancouver Island Life at 6:24 AM No comments: Links to this post

This weekend is part of the reason I started this Vancouver Island directory and tourism search engine in the first place. We're all heading up to Courtenay and Black Creek for the Filberg Festival and staying at the Pacific Playground RV Park and Campground. My wife will be selling at the Filberg Festival, something she did 2 years ago and the rest of us will be enjoying the recreation opportunities up there, fishing, swimming and everything else. Watch this space and the directory itself for pics and reviews.
Posted by Vancouver Island Life at 8:20 AM No comments: Links to this post